They are both talented.

They are both determined.

They are both ambitious.

This is how we see the two students who dedicated their time to make an extracurricular project: Urszula Jedynak and Jan Moskal.

Let’s do something together! So how did it all start

The idea came from Monika Marek-Łucka, a lecturer of lettering and visual communication classes at Polish-Japanese Academy of Information Technology (PJA).

Monika contacted us. She had an idea of working together: she teaches graphic designers who create original projects. The students work on the designs that often end up only in their portfolio. But…  they can also create something that someone actually needs.

That someone was us. The “something” we needed was a new cover for Studia Demograficzne (SD).

And that’s how it started.

The aim was to create a new cover from the scratch for SD. It had to reflect the new chapter in our Journal – the chapter full of dynamic changes.

We, the current Editorial Board, took over SD over a year ago. Some of the things that we changed, among the others, were:

All we needed now was a new cover that would correspond with our new road and our energy.

Unfortunately we could choose only one.

We have chosen Urszula Jedynak’s cover. But, as you can see below, both designs are great.

The designs and the ideas behind

The idea behind: To me, the notion of the demographic studies consists of two equally important factors: population and statistics.

In my project of the cover, I decided to deliberate on the statistical part, as I aimed to underline the scientific aspect of the demography. To achieve this goal, I changed some letterforms in the title of the journal “Studia Demograficzne” so that they resemble the graphs used to present the data in the demography. To complement graph letters, I created the remaining letters from the geometrical shapes.

The combination of the two gave the cover the feel of simplicity and minimalism, while still conveying the intended message in a modern, dynamic way.

In the background I used the official colour of the SGH Warsaw School of Economics to connect the Journal with the university. The accent colours used in the typography give the cover fresh and individual look.

The idea behind: My idea for Studia Demograficzne’s cover was to create a brand new typography from scratch using simple geometrical figures such as rectangles and circles. I aimed to fit the whole title and magazine number in a 3x3 grid system as it would be beneficial for future uses of my project such as pattern, brand marketing or even icons.

The simplicity and use of mathematical grid in my cover are direct representation of Studia Demograficzne’s identity – scientific but without unnecessary complications.

This is a simple way of saying that science is indeed beautiful and if taught properly, it definitely isn’t incomprehensible. 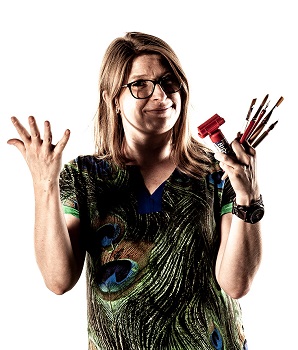 Graduated from Academy of Fine Arts in Wrocław with a M.A. Degree in Graphic Design and Warsaw University with a B.A. Degree in Philosophy. Currently PhD researcher in the field of visual arts at the PJA. Graphic designer and information designer with more than 10 years’ experience.

Currently working on the book "Lit[t]era Romana" – an anthology of texts from the first Polish typographical magazine Litera edited by Roman Tomaszewski in 1966–1974.