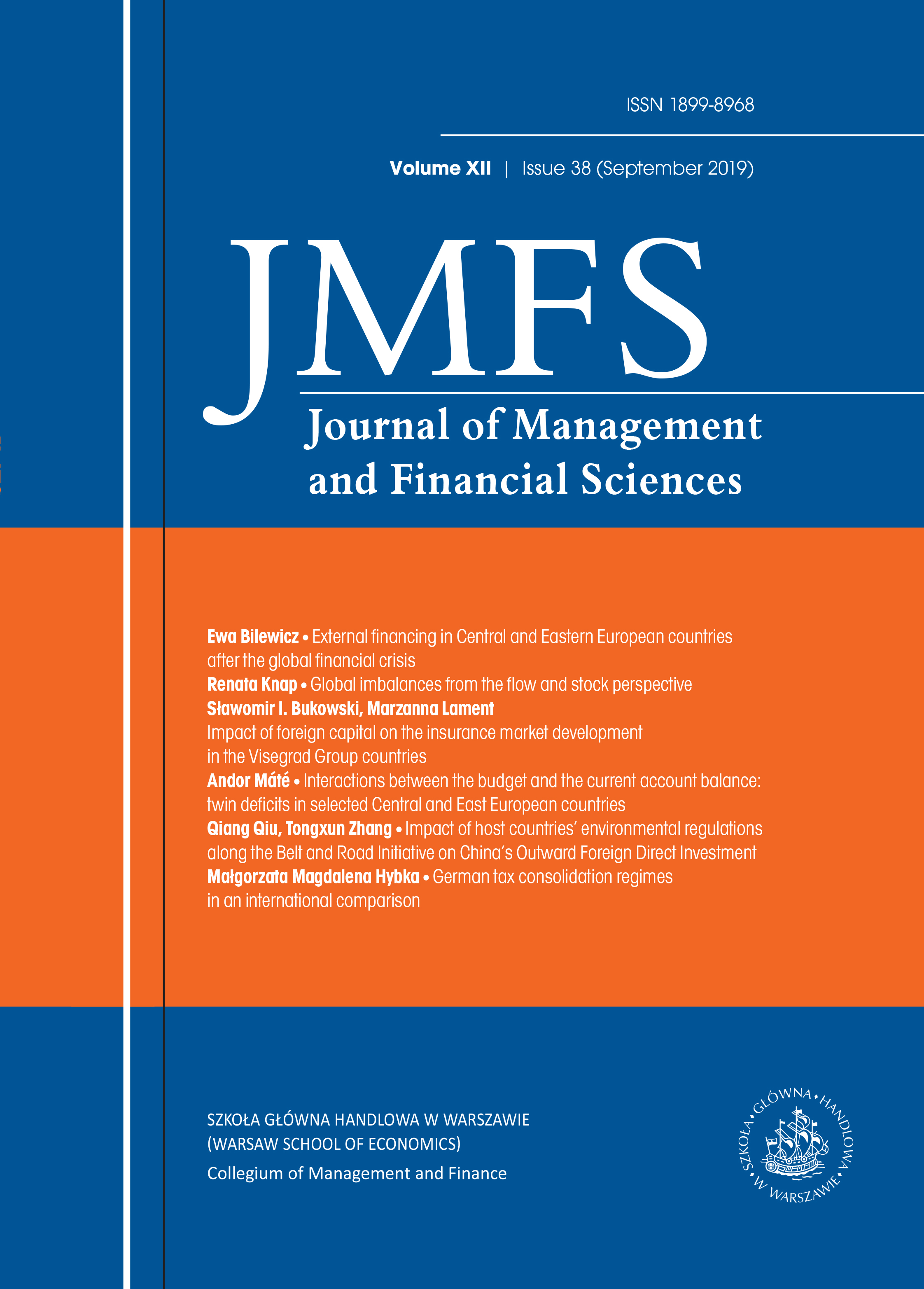 Dear Reader,
We present you with the 38th edition of the Journal of Management and Financial Sciences.
The current paper is mainly focused on international issues. Thus, authors from academic centres from around the world raise issues related to financial markets, fiscal policy, direct investment and the tax system.
We hope that these articles will present a contribution to the development of economic thought and contribution to a fuller understanding of the complex issues.
The aim of the first paper by Ewa Bilewicz is to analyse changes in the financial account of
the balance of payments in 11 Central and Eastern European Countries (CEE) during the years
2007-2017. The analysis comprises changes in the value of the financial account's components.
Renata Knap in her study attempts to identify global payment imbalances from the flow and stock perspective in the years of 2000-2017, as well as to define the causes of differences in the development of global imbalances in both of the analysed aspects.
Sławomir I. Bukowski and Marzanna Lament describe and analyse dependencies between foreign capital and the development of the insurance market in the Visegrad Group countries.
In the next paper, Andor Matę aims to explore whether there is, if any, relationship between
fiscal policy and the balance of the current account in Poland, Hungary and the Czech Repub- lic. The period which he analyses is the last two decades since the millennium. Based on the literature review, the author examines the relationship between the budget deficit and the cur- rent account with econometric methods, Engle-Granger cointegration test and Vector Error Correction Model (VECM).
Qiang Qiu and Tongxun Zhang make use of the panel data of China's direct investment in 61 countries along the ‘Belt and Road' from 2006 to 2016. Using the investment gravity model, the authors carry out the total sample regression, and then carry out the sample data regression according to the national income, the environmental regulation intensity and the district position. The study found that, as far as the overall sample is concerned, the national
environmental regulation along the ‘Belt and Road' has a significant inhibitory effect on Chi- na's OFDI, and the countries along the line are grouped according to income levels.
The last article by Małgorzta Hybka reviews the German tax consolidation model and discusses requirements and options for that consolidation. Moreover, it compares German consolidation rules with the ones implemented in selected countries. The methodology of this article is determined by the research objectives and the research topic.
We wish you pleasant reading.
Ryszard Bartkowiak,
Chairman of the Scientific Council and Dean of the Faculty
Michał Matusewicz,
Vice-Chairman of the Scientific Council and Vice-Dean of the Faculty

Global imbalances from the flow and stock perspective

Interactions between the budget and the current account balance: twin deficits in selected Central and East European countries