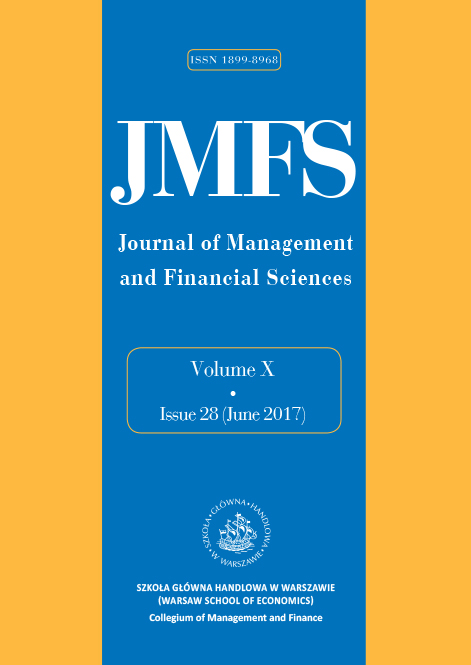 Preface
Dear Reader,
We present you with the 29th edition of the “Journal of Management and Financial Sciences”. We hope that its content will make a valid contribution to the development of economic thought and contribute to a deeper understanding of complex issues discussed in it.
In the paper “Fiscal Multiplier Determinants in the CESEE Region”, the authors – Milan Deskar-Škrbić, Hrvoje Šimović, Antonija Buljanwe – use a panel VAR model with exogenous variables to analyse the effects of various structural characteristics of the economies on the effectiveness of government consumption in the Central
Eastern and Southeastern European region (CESEE). They analyse the effects of government consumption on economic growth in this region, controlling for the effects of the size of the economy, level of public debt, level of tax burden, openness of the economy, rigidity of the labuor market, monetary regime and the phase of
the business cycle. The results of this analysis indicate that these characteristics have a significant impact on the effectiveness of fiscal policy (in terms of the size of the fiscal multiplier).
The author of the article entitled “Strategic Dimension of Innovation” – Maria Romanowska – presents the conceptualisation of one of the aspects of strategic dimension of innovation: the choice of the method of innovation activities carried out by enterprises. Original proposals of strategy models are presented against the
background of innovation strategy models described in literature, and the method of their identification is illustrated using case studies of five Polish innovation enterprises.
The aim of the next paper, “Executive Compensation: Its Structure, Links to Company Performance, Executives’ Perception, and International Differences” by Jacek Miroński and Rafał Dembowski, is a review of contemporary executive compensation schemes including their structure and links to company performance. The research conclusions prove that executive compensation maximizing benefits for a firm should not only address the principal-agent problem through properly designed incentives, but also reduce a manager’s propensity to excessive risk-taking. Finally, it provides practical recommendations for compensation committees how to effectively design remuneration policies.
The next paper “Should Investors on Equity Markets be Superstitious (on the Example of 52 World Stock Indices)?” by Krzysztof Borowski considers the problem of efficiency of financial markets, especially the weekend effect has always fascinated scientists. This paper tests the hypothesis of the unfortunate dates effect upon 52 equity indices in relation to the following four approaches: close – close, overnight, open-open, open-close, calculated for the sessions falling on the 13th and 4th day of the month, Friday the 13th, Tuesday the 13th. The last part of the paper consists of an analysis of the correlation coefficients of Friday the 13th (close-close) rates of return calculated for the analysed equity indices’ pairs.
The objective of the next paper “IPO as a VC Funds Type of Exit” by Dorota Podedworna-Tarnowska is to show the success and profitability of going public by VC funds. The VC’s exit type as a way of cashing out on its investment in a portfolio company is a consequence of the exit strategy which means the plan for generating
profits for the owners and investors of a company. While an IPO is the most spectacular and visible form of exit, it is not the most common one, as historically in the US it was, but still in Europe it has not been yet. There will be both literature and statistical data used in this research, coming from different studies and reports.
The aim of the article “The Role of the Polish Private Equity Sector in the CEE Region” by Jacek Grzywacz and Ewa Jagodzińska – Komar is to analyse the position of the Polish private equity sector as a leading player in the CEE region and to assess the impact of these funds on economic development. The conclusions and directions
of the role of private equity funds were presented, and it was emphasised that Poland and the whole CEE region are at an early stage of their market development, but their distance to Western Europe decreases from year to year. Currently, the CEE private equity market in the most developed countries offers great opportunities to its investors, thanks to high competition, high growth potential and comprehensive solutions.
The next paper – “Information and Statistical Efforts of Selected Safety Network Institutions in the Area of Financial System Stability” by Piotr Komorowski and Dariusz Filip presents the role of financial system stability as a public good. The authors claim that the main role of the financial safety network is to stabilise the system. An overview and analysis of selected studies addressing financial system stability helped the authors draw theoretical and practical conclusions as to the stability itself and the impact of information and statistics upon its improvement.

Waldemar Rogowski, in his first of two articles about payment delays entitled “Deferred Payment, Late Payment, Payment Backlog and How They Are Interconnected” discusses the problem of payment delays in commercial B2B transactions and payment backlogs resulting from them. It also aims at identifying linkages
among deferred payments, late payments, and payment backlogs taking account of the scale of these phenomena in Poland, as well as in other countries. The paper provides recommendations as to what should be done to reduce the scale of these negative phenomena.
Joanna Dominowska in her paper “Effectiveness of State Supervision and Control of Foundations’ Economic Activity” claims that the Polish system of law does not include effective and fast supervision and control measures of economic activities conducted by foundations, and the supervision is inconsistent and ineffective. The research showed the necessity for the creation of uniform standards of supervision of foundations, including a uniform report form. The summary of the research presented remarks de lege ferenda concerning changes in the legal regulations on foundations’ supervision, including the economic activities conducted by foundations.
Tobias Hagemann in his paper “Attribution of Profits Derived Before or After the Existence of a Permanent Establishment under Tax Treaty Law” discusses attribution of profits under tax treaty law provided for by the OECD Model Tax Convention. In doing so, it is found that profits derived before or after the existence of a PE should be attributed to the PE because not only the wording but also the context and purpose of the OECD Model support this view. In further analysis, however, it is shown that slight changes in attribution may be expected under the new “Authorised OECD Approach”.
We wish you a pleasant reading.
Ryszard Bartkowiak,
Chairman of the Scientific Council and Dean of the Faculty
Michał Matusewicz,
Vice-Chairman of the Scientific Council and Vice-Dean of the Faculty

Should Investors on Equity Markets Be Superstitious (on the Example of 52 World Stock Indices)?

IPO as a VC-Funds Type of Exit

Deferred Payment, Late Payment, Payment Backlog and How They Are Interconnected (the first of two articles about payment delays)

Effectiveness of State Supervision and Control of Foundations' Economic Activity