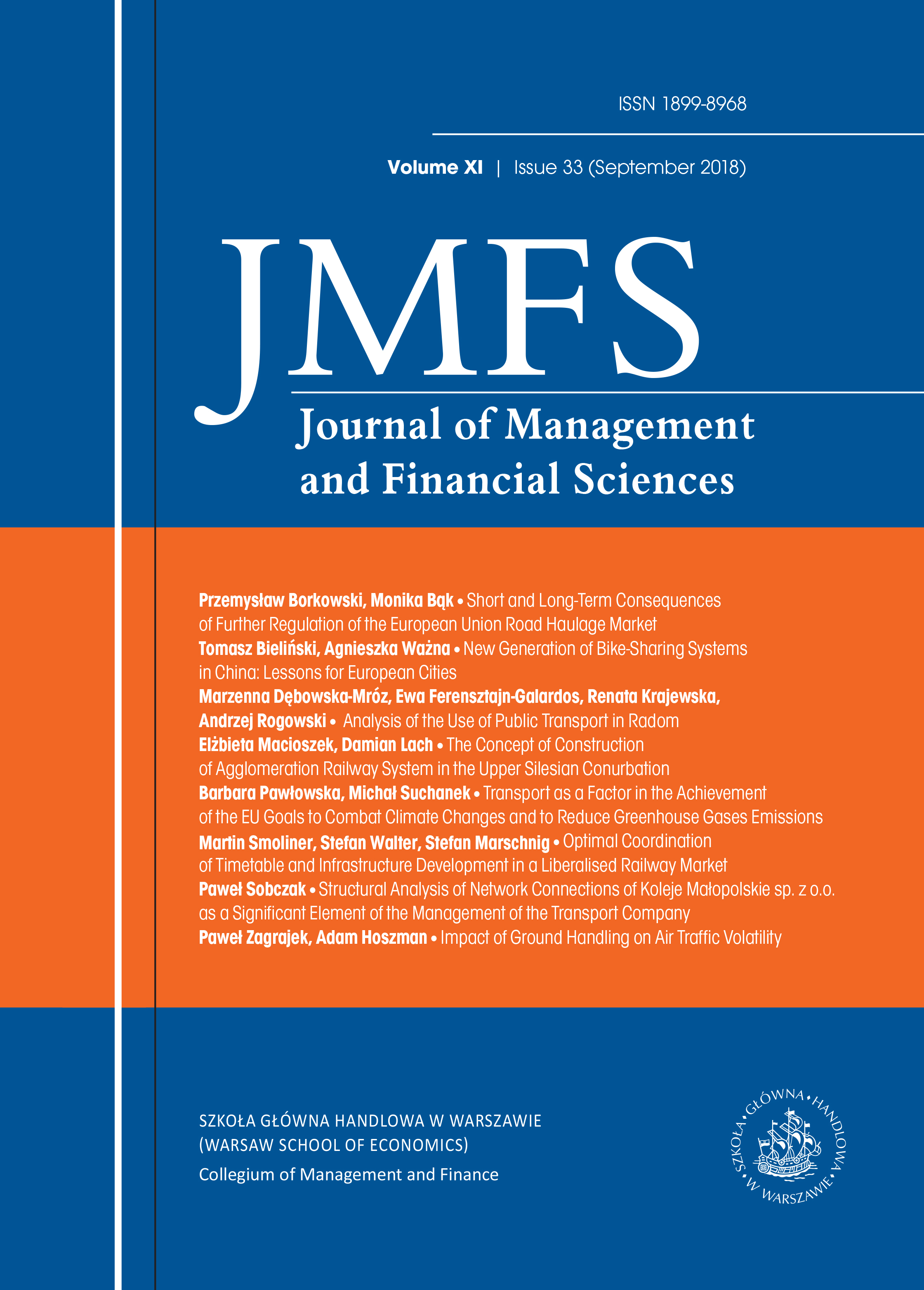 Preface
Dear Reader,
We present you with the 33rd edition of the”Journal of Management and Financial Sciences”. This edition contains important and current issues affecting the development of transport both in Poland and in the European Union.We hope that its content will make a valid contribution to the development of economic thought and contribute to a deeper understanding of complex issues discussed in it.
The objective of the first paper by Przemysław Borkowski and Monika Bąk is to assess short and long-term consequences of the new regulatory framework in the European Union road haulage market as proposed by the European Commission in the “Mobility package”.
The aim of the next paper by Tomasz Bieliński and Agnieszka Ważna is to identify major advantages and challenges resulting from the implementation of Chinese solutions in Europe or expansion of bike-sharing companies to Europe.
Marzenna Dębowska-Mróz, Ewa Ferensztajn-Galardos, Renata Krajewska, Andrzej Rogowski in their article present the results of a survey conducted among drivers of public transport buses. These tests included information on filling and passenger exchange in the means of transport of individual bus lines in Radom.
The next article by Elżbieta Macioszek and Damian Lach presents the concept of establishing a fast agglomeration railway as a complement to the existing transport systems in the Upper Silesian Agglomeration.
Barbara Pawłowska and Michał Suchanek present in their paper the results of the research which show the impact of various identified tools on the achievement of the three priorities of the climate policy. The multivariate analysis of variance (MANOVA) was used, in which the dependent variables were: the GHG emission levels, the use of renewable energy and the energy intensity of transport. The results were calculated based on the data from the 28 Member States and the model was verified.
Martin Smoliner, Stefan Walter and Stefan Marschnig in their paper are trying to identify how open access traffic can be integrated in an ITF-system according to the EU-legislation.

Advantages and disadvantages are discussed and finally the optimal procedure in terms of a sustainable network development is recommended.
Paweł Sobczak in his article analyses the structure of network connections of a railway carrier operating in the Małopolska region (Koleje Małopolskie sp. z o.o.) in Poland. The aim of the analysis was to obtain information about the current condition and parameters of the network offered by the carrier.
In the last paper, Paweł Zagrajek and Adam Hoszman review the existing and potential impact of airline handling on air traffic volatility from the point of view of airlines and ground operations.
We wish you a pleasant reading.
Ryszard Bartkowiak,
Chairman of the Scientific Council and Dean of the Faculty
Michał Matusewicz,
Vice-Chairman of the Scientific Council and Vice-Dean of the Faculty

Analysis of the Use of Public Transport in Radom

Structural Analysis of Network Connections of Koleje Małopolskie sp. z o.o. as a Significant Element of the Management of the Transport Company